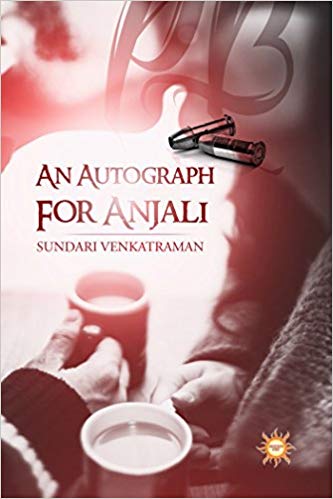 An Autograph For Anjali follows the journey of Anjali a stay at home lady who also happens to be a wife of a very rich guy. She wants for nothing but still searches to fill her emptiness. The book is a commentary on the ‘empty- nest syndrome’ parents especially mothers face when grown-up kids leave the home for education or jobs. This is more acutely felt by Anjali since she is emotionally alone. Her husband openly cheats on her and has no emotional connection.

I found Parth to be the most well-etched character as if he were the author’s favorite from all the characters – he could say no wrong, do no wrong and the journey he had to reach where he is added depth and integrity to his character. I was impressed with him as well. However, given his life, I felt he needed a bit more grey in him – a tiny bit of grey. 😉

Arjun the son was a bit incomplete persona for me since I found him to be very mature at times but his interaction with Parth made me cringe. A grown man would not be so open to another guy who is just a friend or whom he just met. He is a young man still getting the hang of life and loses his father so I suppose it is possible but he should have some friends he could count on? However, I would love to read his story where he comes in as his own man. Here he was just a bit aimless, kind of a simpleton and docile.

The catalyst to the change Anjali heralds is her life is her husband’s apathy and the other woman as well as her own attraction to Parth. That she is afraid of her emotions and fears the turn her life is taking is written so realistically by Sundari. If we just read the confusion and dilemma Anjali faces it reminds us of the sad fate of many ladies who happen to get divorced in the mid-30s or 40s since their husband found a new squeeze. She may be a rich man’s wife but this ails all levels of our society, kudos to Sundari as she yet again pens a love story with a social message of the ills of our society.

This is a romance with a murder and the wife seems to be the most likely suspect. The murderer was clear to me by the time I had read 60% of the story but the thrill of the book was in finding how and why (though I suspected it) it was done and how the killer escaped from the home. The story moves between the murder and the lives of the protagonists as we learn of the possible motives and the emotions of the characters in the backdrop of the murder. Also, I felt that the other characters or rivals could have added to the mystery of who could be the murderer and keep the reader guessing.

I have always believed that it is not the wife who is at fault if her husband cheats on her. It is the man’s weakness and in real life as well as in this book it is confirmed as Anjali is a beautiful, cultured, educated woman but her husband still ignores her. The story is well written, flows and the flashback was very interesting. I liked how the story of Parth and Anjali unfolded. She really did deserve a second chance and I loved how she bloomed and all the spice made me smile. Thankfully I was reading alone so no strange looks from strangers 😀

Murder or not this is basically a love story and goes to the heart of a middle-aged woman, her struggle, her dilemma, and her self-discovery. She has all the money but no appreciation or love or companionship. There are sadly scores of women like Anjali – rich or poor who continue to work, take care and toil for their families – unappreciated and unloved. Anjali was able to break the mould that many do not even recognize they are stuck in.

I root for Anjali and am glad she got the autograph! 😉

( I got a copy of the book from Amazon.com and this is my honest opinion.)

An Autograph For Anjali

Jayant Mathur is found murdered in his bed, shot at point-blank range with his own revolver. Though she’s extremely disturbed by his death, Jayant’s wife Anjali is way more upset about something else. Who stands to gain by killing the multi-millionaire businessman?

Parth Bhardwaj is a friend and neighbour of the Mathurs. Parth is an author who goes by a pseudonym. He appears more than a friend to Anjali; while he’s also on good terms with her son Arjun who lives and studies in the UK. What role does he play in Anjali’s life? Jayant’s relatives are curious to know.

Jayant’s brother-in-law Rana is convinced that Parth and Anjali are the murderers. But Inspector Phadke has his own doubts about this theory. In comes Samrat, the private detective who appears as quiet as a mouse. Will he be able to find the murderer?

Will Anjali find happiness and peace?