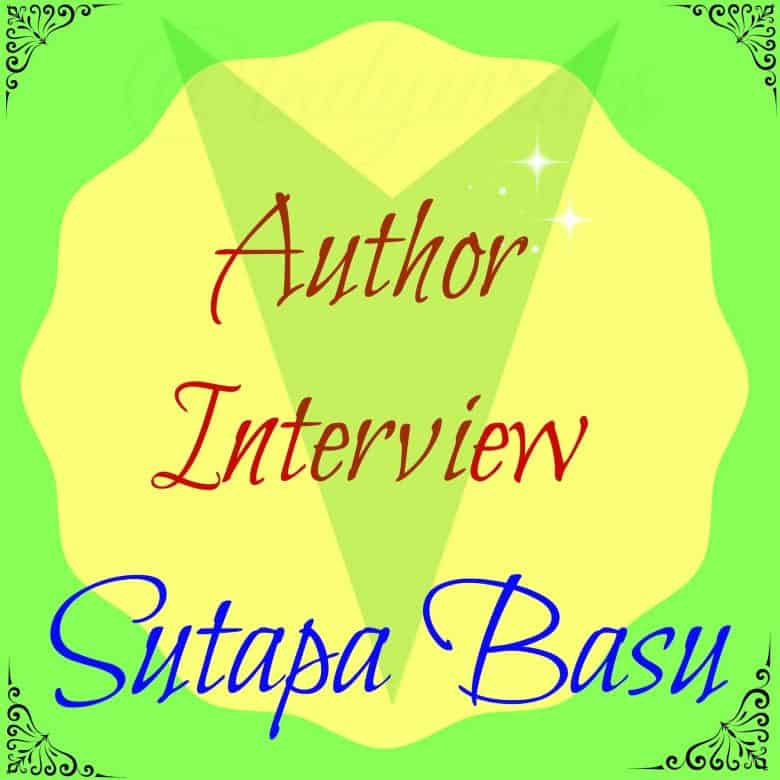 The blue cover with its upside down text instantly catches the eye, the confident Ipshita beckons with her pizzazz and the reason for it all is the gifted and super talented Sutapa Basu. An Army wife and a word lover all her life she has written Dangle with élan.

An author, poet and publishing consultant, Sutapa Basu also dabbles in art and trains trainers and is a compulsive bookworm. During a thirty-year-old professional career as a teacher, editor, and publisher, she travelled the Indian subcontinent, Nepal, and Bhutan. She has visited UK, USA, Dubai and Singapore while working with Oxford University Press, India and Encyclopædia Britannica, South Asia until 2013 when she decided to start writing seriously.

Sutapa is an Honours scholar from Tagore’s Visva-Bharti University, Santiniketan and holds a teaching as well as a masters degree in English Literature.

As a publisher, Sutapa has developed and published around 400 books. Recently, her short story was awarded the First Prize in the Times of India’s nationwide WriteIndia Contest, under author, Amish Tripathi.

I had the honor to meet her at the Gurgaon launch of Dangle and she is all that her book and bio say and a lot more. Today I am pleased to welcome Sutapa to the blog as she talks about the book, her writing journey, and her words.

Q1. When did you decide to become a writer? Why do you write?

Sutapa – I have been a voracious reader from, I believe, the age of 5 or 6 years. There were times as a child when just playing a game, I would tell the story that I may be reading at the moment to a gang of my friends. From there it was a small step to writing plays which we would all act out. According to my mother, I wrote my first play when I was around 8 years old.

Apparently, she found it scribbled in an old school exercise book flying about our play area and preserved it for posterity. Ever since, all through my school and college days, my jaunting around with my husband, raising children, working at teaching, training and publishing I have been writing fiction, poetry, and features.

A lot of school textbooks that I designed, developed and published by Oxford University Press and Encyclopaedia Britannica, South Asia carry my stories and poems. I would write them on the spur of the moment when we could not find suitable stories for the textbooks to teach the English language to students.

It was 2013 when I decided that now I cannot but listen to all those voices chattering in my head and focus on giving birth to their stories. That was the time I took a conscious decision to start my third innings as a writer.

Sutapa – I am an author of children’s fiction. I have a huge collection of stories, plays and poems for children aged 5 to 16 years. Many of my works have been published in English school textbooks read by students of schools in India and abroad. I have plans of writing a fiction series for children. I also intend to translate a book of popular children’s fairytales written in Bangla.

I am, till recently on stage, an exponent of Tagore dance, which to uninitiated, is an art form that expresses Tagore lyrics through mudras and rhythm. As I had been an English teacher in private schools for around 16 years, I had the opportunity to direct and stage ballets with a 200 kids cast. In fact, I have adapted ‘Peter Pan’ into a two-hour long musical, written lyrics for it, composed music and choreographed it for the stage with 250 kids acting in it. It was staged in 1998 at Delhi. Even props like the pirate ship and the tree house were built in the school by the students of the Art Department!

I love travelling. Seeing new places gives me great pleasure and I always discover people, tales, art, places in nooks and corners that are not the usual touristy stuff. Eventually, they become part of my stories.

Sutapa – When I consciously focused on writing seriously in 2013, I veered naturally towards authoring a long fiction. But choosing the theme of ‘Dangle’ happened more unconsciously. After shunting around the country and beyond it for about 20 odd years as an army spouse, I finally took root in Delhi. Here, my work, travel, and interactions with people gave me the opportunity to observe many urban neuroses. It set me thinking and wondering why such intelligent and obviously talented people gave into their own devils or remained dangling, strangled by their own indecisions. But they were not the only ones. I also met people who had decided to come to the big city to find their destiny. Many of them had come from small towns and adjusting to the demands and restrictions of the city was overwhelming for them. Many had to deal with barriers of an unfamiliar language and unprovoked dissonance so typical of Delhi. Yet they stayed, worked and found their feet.

As I had attempted to look under the surface, I found in them the strength of determination, undaunted tenacity and unwavering faith in themselves. I wanted to bring all these different and often contradictory elements together on one stage. Gradually, the seed of ‘Dangle’ began to grow until it took over all my waking and sleeping moments. So in 2014 when I sat down to write this novel, I was putting into words a multitude of thoughts that had been fermenting inside me for a while. Drafting it was like a catharsis for me.

Often I would be on my laptop well into the wee hours and sometimes I would get up in the middle of the night as a phrase or an idea would occur to me. I would key it in before it passed from my memory. So ‘Dangle’ actually grew on me over time and much of it came alive during the process of writing it.

Sutapa – Having come from hardcore publishing, I am very aware how important the cover design of a book is. It is the packaging of the product and like any other marketable aspect, it needs to attract and hold attention. Did you know that studies indicate that a buyer spends less than 60 seconds to buy or not buy a book? This buying judgement is a series of unconscious judgements that depend on several factors. The design of the cover is just one of them. I think the most important thing about the cover is to ensure it does not repel the buyer. So I do spend a lot of time thinking and judging the cover design of not just my novel but also the anthologies or books where I am the contributing author or the editor.

For ‘Dangle’ I was sure about the fact that the title MUST be upside down and the colour blue. The rest of it has been designed by my brother, Debashis Bose, who is an artist and a brand advertising professional.

Sutapa – Names of characters are very important to me because they must resonate with the features of the personality. I choose names that suit type, age, profile of my characters and also the historical period or the region where the story is set. The meaning of the name must also represent the character.

No, I don’t have any name choosing resources. I usually google names according to language or region or meaning.

Sutapa – Publishing is going places! You see, the world is not restricted to print publishing anymore. There is online publishing, digital publishing, and publishing on the mobile app. The future is very bright, especially in India! Today the reading audience in India is focussed on Indian settings, Indian themes and Indian ideas. And it shows up in the proliferation of Indian writers writing in English. And the funny thing is that many of these authors who are so Indian in their writing nuances have quite a following beyond India as well.

I believe one way of promoting the literary industry is to have book aggregators. While steps are being taken in this direction, it is still in the nascent stage. Another way is to have a literary YouTube where you can load any literary endeavour easily and get hits on it. At the end of the day, every author writes to be read. In this way, one can garner a huge reading audience. As far as I know Readomania is one publisher which has something akin to this concept but more needs to be done.

One more idea is to narrate or recite stories, dramas or poems through a phone app. There exists a huge number of senior citizens who find it difficult to access fiction, articles or poetry online or read fonts on a computer screen or the mobile. But they would love to listen to literary renditions and what else, they have enough time on their hands to do so! If an app could provide this service, there is a captive audience out there for us authors.

Sutapa – Absolutely. I read every review and respond to them. All reviews are good; some may have constructive criticism and they should be viewed as such. When I have found a critique on some aspect of my story either I take it as the reviewer’s impersonal choice which could differ from mine or I consider it a means to improve my writing. There are some reviewers of my books who would validate that having read even a tiny suggestion in their reviews I have contacted them personally to discuss the suggestions and requested them to tell me more. I appreciate that they gave me their time and effort. These discussions have helped me to better my writing and I am grateful to these reviewers. I believe one must keep learning all the time and reviewers are excellent mentors in this regard.

Sutapa –Well I am writing all the time. I write the moment something seizes my focus; could be a news item, a story on TV, a real-life incident. When the Nice assault happened, a poem jumped into my mind when I read the words of a child survivor and I penned it down. You can read it on my site. Recently I have started a series of travel chats named, ‘Itchy Feet Jaunts’. These are anecdotal accounts of my travels. I have a website, www.storyfuntastika.com which is a blog – cum – literary site. Readers can discover more about me and read my articles, blogs, stories, plays and poems for children and grown-ups on it. Other places where a lot of my stories and articles have been published online are Readomania.com and cafedissensusblog.com

WIP is a long fiction. It is about a woman who believes she is strong enough to attempt an Icarus.

Thank you, Sutapa for this insightful and engaging interview. All the best for your future endeavors.

Play the Game of Rafflecopter