The Doppelgänger is a thriller that lives up to its name, mystery, and suspense.  The author has spun a tale with many layers making it impossible for me to judge who the real enemy was. The story starts with a man who has forgotten his memories and is traveling to Manali.

The plot thickens as the bits and pieces of his mind come back, clues that show up conveniently to guide him or to confuse him? The plot has so many layers that till the very last page I was wondering about the culprit and still I got the wrong guy.

Prateek gets the reader engrossed and involved in the fate of Sameer as he navigates the route to his memories, with strangers and an altered mind. The mystery deepens with the entry of Gupta – a retired police officer who is now a disillusioned guard. He provides the vital link to the story of Sameer and then emerge Prakash & Palash – the twins, Dr. Robert, Amit and Rai. Who is the evil guy or are all of the thugs out to get each other? The story becomes quite murky while we try to unravel the clues.

A couple of gruesome, senseless murders that shook me up but were in tune with the #PsychologicalThriller and mind altering theme of the book. A Doppelgänger is someone who looks spookily like you, but isn’t a twin, originally, this was a type of ghost. Sameer – as he names himself tries to embrace himself within the void he feels. His memory fails him yet his true nature perseveres. You cannot fool nature.

“But greed is a persuasive emotion, easily out doing reason and morality, eclipsing almost everything—the guilt of cheating, betrayal of trust, the fear of getting caught. It created a rush of adrenaline that led to a reckless confidence. Appetites he never knew existed in him now loomed up in the air and danced around him.”

The story, writing, and language are good, keeping the theme of the book consistent. Rich or poor, young or old, town or city dweller they all get a voice. It took me time to get into the story but once Gupta started his story I know Police is involved, followed by goons, mafia, and the drug cartel. Lots of masala here, just a bit of titillation is missing.

Not a single mention of a woman except a dead one. I would have enjoyed a woman’s point of view as well. Maybe a drug lord’s moll? Or a mother lost and forgotten? I hope in his next book Prateek makes space for my lady-like request.

Prateek Yadav captures the essence of the feelings and emotions of the characters and most of them have shades of gray making them more interesting, Even Dr. Robert love is tinged with obsession.

Being a con man, he had always felt, was like being a stage actor, and these moments of peace always helped him to create a little room for improvisation.

As a wise author he has created suspense from the very first page and crafted his story with a subtle narration. The author builds up on the suspense and reason of the protagonists’ predicament while narrating the stories of the other characters. One of these is the evil mastermind and we are sympathizing him, unawares of his treachery. I must applaud Prateek for his approach to the evil villainous motley crew shadowed under the guise of well-wishers and aides. Lulling and misleading the innocent reader.

Tying all the threads, Prateek brings it all together in the climax and left me astounded with the ending. This is his first book, kudos to the author. Keep writing and to shock and surprise us.

Dear reader, have you ever seen or met a Doppelgänger? Have you ever met a person who looks eerily similar?

I have and enjoyed The Doppelgänger more so. 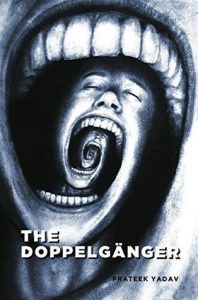 The perfect plan for the perfect heist-a team of con-men, foolproof disguise, and a painting worth millions, nothing could have gone wrong. But something did… A man finds himself on a bus to Manali with nothing but some cash and severe memory loss . Embarking on a frantic hunt for his identity, he begins to discover that his presence in Manali isn’t an accident. The closer he gets to the truth, the more elusive it becomes. Ghosts from his past haunt him as he finds himself trapped between his doppelganger, the police, a sadistic gangster and his own dwindling sanity. The journey of the search for his identity ends up being a race for survival.