Today I have the honour of a very special guest on my blog.  All those who follow my blog would know that I am not a fan of anything scary but I have heard and read so much about Encounters – Someone’s Always Waiting by Sumana Khan that I had to read the book. Today is another first – the author has shared an exclusive short fiction story with all you lovely readers.

The first guest post with a short story by the uber – talented Sumana Khan.

It was nearing eleven in the night by the time we hit the Kottagudi Road junction—a neat curvy bend that swung us on to the Kochi-Dhanushkodi road.  During the day, this is a spectacular stretch cutting across the Bodi Hills, a true testament to why Kerala is called God’ own country.  The drive is made all the more memorable because of the thrilling hairpin bends hugging the mountains and bordering the cliffs, and of course, the elephant herds that one is likely to encounter. At night, it is a different story.  The roadside restaurant owner back at Bodinayakanur warned us not to go ahead. ‘Thick fog is predicted. Those bends are tricky even for the most experienced driver and you are just city folks. It’s already 9pm. By the time you enter the ghats, it will be eleven.’

I sided with the owner. I tried to persuade Ashish that we could lodge at a nearby hotel and head towards Blue Lotus Spa in the morning.

‘Anyway Nimmi’s wedding is in the evening,’ I said. ‘We can check out at day break…we’ll reach the Spa before breakfast time.’

But Ashish was adamant. Nimmi’s folks had already spent a lot of money for the suites. ‘Each suite is like twenty thousand bucks,’ Ashish hissed.

I did not reply. I did not want to have another row. We’d argued viciously over petty things all through the twelve-hour drive from Bangalore.

As we paid up for the dinner, the restaurant owner gave his mobile number. ‘Save it on your phones. My name is Benny,’ he said.

‘Yeah …can you note it Archu,’ Ashish sounded irritated as he turned to me.

‘No. Save it on your phones now.  And both of you give me a missed call so the number is on top of your dialled lists.’

‘Look boss, we don’t have time…’ Ashish could be such a jerk at times.

‘Twenty-two people have gone missing from that route in the past five years,’ Benny cut him short. ‘I would still say you are risking it. That’s your choice. But if you face any sort of emergency, give me a call.’

‘What happened to those missing people?’ I asked. My head throbbed.

Benny shrugged. ‘They were never found. No body…nothing.  Their vehicles were undamaged…I mean there was no accident or anything.’

We saved Benny’s number on our mobiles and gave him missed calls.

Benny nodded. ‘Your tank is full?’ He did not wait for a reply. He came up to our car and hunched over each tyre, feeling the pressure with his hands. And then, we were off.

We entered the Bodi Hills forest area a little after midnight.  We drove in silence, hypnotised by the treadmill-movement of the road illuminated by our headlights.  The forest was thick and immediate on either sides and a pressing claustrophobia enveloped me.

An hour later, after having navigated a particularly nasty bend, Ashish stopped the car. ‘Want to stretch my legs. God the road is never-ending.’ He left the parking lights on and got out of the car.

I unbuckled. I was worried about tuskers being attracted to the lights.

‘We’ve been driving for two hours and not a single vehicle has passed us. Did not even catch any headlights on my rear-view,’ Ashish said as he did some stretches. ‘Come out. This is silence in its purest form.’

I opened the door to stretch my legs but remained seated inside the car. With the car engine off, except for the ting-ting of the door alarm, I found the silence around us oppressive. Of course, the forest whispered in its own language. Far away, we heard the echo of a clap of thunder, although, above us, we saw a clear night speckled with stars and a full moon.

‘I think we should start,’ I said.

‘Yeah, I see the fog descending. Lock the doors. I won’t take a minute.’

‘So do it here, with your back to the road. Are you out of your fucking mind, trying to get inside the forest?’ My voice was shrill.

‘I’m just going behind this tree. Right here.’  The tree was a little ahead of our car.

Before I could say anything, Ashish stepped behind the tree, as if consumed by the forest.

‘Ashish this is not funny. It’s getting late, come on!’

There was no response.

I felt angry. ‘Ashish please don’t do this!’ I knew he was mucking around. This was his idea of fun.

‘Ashish I swear I’ll drive away.’

A full minute passed by and nothing happened. I imagined him leaning against the tree and laughing silently.

I clambered on to the driver’s seat and turned the engine on. And waited. There was no Ashish. What if something had happened to him? Maybe a snake-bite? I pictured him lying unconscious behind the tree.

I turned off the engine, pocketed the keys and got out of the car. I switched on the torch on my phone and yelled out his name.  The silence was an emphatic response. I ran to the tree, fully expecting Ashish to jump out, laughing hysterically. There was no Ashish. The light from my phone-torch was useless; it was no match for the darkness oozing out of the forest. ‘Ashish? This joke is no longer funny…’I sobbed.

From somewhere within the forest, I saw a light. A mere flicker, and it vanished. My mobile phone felt hot in my hand. Searing hot. I dropped it. Then, I heard a strange sound. Some kind of a static. This was followed by a low-frequency hum that made the filling in my molar ache.

I don’t remember anything after that. I was found lying unconscious in the middle of the road by a goods lorry. The forest officials deployed the CRPF to look for Ashish in the forest. They found his shoes near the tree. Kept side by side, with the socks rolled into them. A mile inside the forest, they found his clothes. Including his innerwear. Neatly folded, as if ready to be packed in a suitcase.  They found my mobile too, at the foot of the tree. It was burnt out of shape.

I was kept under quarantine in a secret location. They’d found traces of radiation oh my mobile. I don’t know who “they” are. The army? Some secret force within the government? Who knows? I was dropped off at home after three months. That was four years ago.  Ashish was never found.

Thank you for this lovely story, Sumana. I look forward to many more awesome stories and books from you.

Do let us know what you thought of the story?

Blurb
ENCOUNTERS is a potpourri of five sumptuous stories involving a motley crew of protagonists. Skating along the borders of fantasy and paranormal themes, the stories track incredible and poignant journeys of self-discovery, tracing the cathartic aftermath of fleeting encounters. 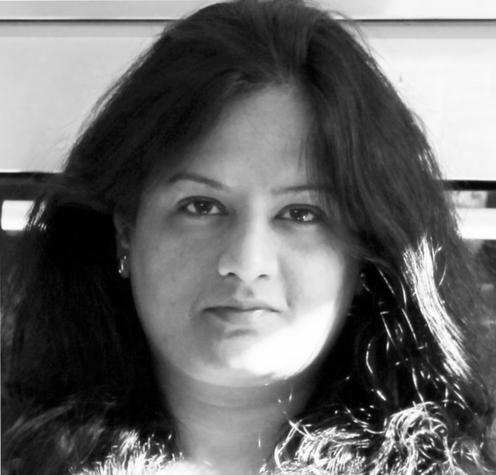 Sumana was born and raised in Bengaluru, Karnataka, where she went on to graduate with a BSc in Electronics, much to the surprise of her teachers, and relief of her parents. In what can only be described as a quirk of fate, she ended up as an IT consultant – a role she essayed for more than a decade. She then moved to the UK where she quit her job and pursued academic and literary interests. The result of this pursuit has been two Masters, one published book, quite a few manuscript drafts, and above all, being stone-broke perpetually.She currently lives in the UK with her husband and several books.