What would you do for another chance with the one you love?
Something Old, Something New – a unique novella anthology – tries to answer this question with fantastic, different, desi dramas.

Whether it is shapeshifters or shifting interracial relationships, single moms in small towns or rich alpha heroes, friends-to-lovers or passionate ex-husbands; this anthology has something for everyone.

Something Old, Something New explores the many different facets of love, forgiveness, fated mates and more in seven, distinctly Indian tales!

In Never Stopped Loving You, Ruchi Singh’s Arjun and Radhika are passionate exes whose messy past collides with heartbreaking romantic suspense in the now.

Neil D’Silva gives a dark, paranormal, feminist take on Beauty and the Beast in Blood Red Love with Vimal and Yamini!

Paper Hearts and Promises by Devika Fernando is a sweet, multicultural love story of Australian Luke and Taara which spans years and continents and exquisite paper lanterns!

Preethi Venugopala’s My Warmest Sorrow is a soft and contemporary take on college sweethearts, Diana and Ajay.

The classic rich girl, poor boy divide between Samaira and Raghav is explored with marvelous angst in Shilpa Suraj’s My Heart’s Regret.

While Aarti V Raman’s No Other Love takes readers on a rollercoaster office romance to a small beach town where divorced doctors Anika and Vikrant have to live and work together…and maybe rediscover each other.

Something Old, Something New explores the many different facets of love, forgiveness, fated mates and more in seven, distinctly Indian tales! 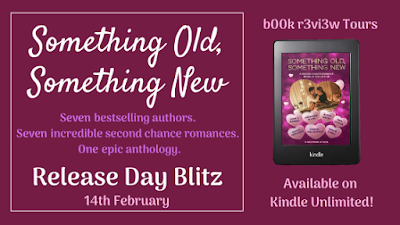 Something Old, Something New
– A DRA Production 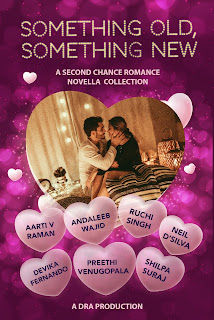 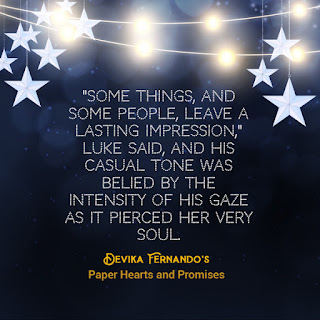 Happy running her little crafts shop and making a lifelong dream come true, the last thing Taara needs is to be reminded of heartbreak. But when Luke, the handsome architect from Australia—and the first man she ever loved—is thrown back into her life, the past and the present collide. She should absolutely not listen to her feelings and jeopardize her stable future, no matter how tempting a second chance seems.

When Luke returns to India after seven years, the last thing he expects is to meet Taara again. He’s here on business, not to lose his heart to the one woman who’s haunted his dreams for entirely too long. Why then does he feel like fighting for what seemed irrevocably lost? Why can’t he resist temptation?

Read an Excerpt from Paper Hearts and Promises

Of all the places, all the people in this city, it had to be her.
Too absorbed in the conversation with what seemed to be a prospective client fussing and demanding like only the entitled ones of this world did it so ruthlessly, Taara hadn’t noticed his presence yet. It gave him time to assemble his features into what he hoped didn’t betray his emotional turmoil—and time to feast his eyes on her like a starving man.
Time had been kind to her, and it had worked its magic as assuredly as his imagination had whenever he’d pictured how she might look now. Still on the shortish side and with the most beautiful smile he’d ever seen, Taara was as beguiling as his somewhat rose-tinted recollections.
She wore her hair shorter now, falling past her shoulders in a high ponytail instead of loose, glossy black tresses reaching the small of her back. A hint of red and brown highlights peeked through the strands he knew were as soft as silk yet surprisingly strong. Dressed in a bohemian-style tunic and beige leggings, she seemed curvier than he remembered her; the girl on the cusp of womanhood who had turned heads all over campus had grown into the alluring woman Luke had known her to be.
Next to the elder woman with her sequin-adorned salwar kameez and layer upon layer of aptly applied make up, she looked like a breath of fresh air. Two tiny golden ear studs glinted in her lobes, and colorful beaded bracelets tinkled and clinked softly against each other on her slender wrists when she gesticulated to argue her point.
Luke couldn’t take his eyes off her. The instant spark of recognition morphed into a flame of desire to touch her that ridiculed the seven years lying between today and the last time she’d been in his arms.
As if she had felt his gaze, Taara abruptly raised her head and glanced at him. Time stood still as their eyes met and held, and he could’ve sworn she would faint because she swayed alarmingly. So she had recognized him too, immediately and without even a word spoken. A small feeling of victory, perhaps vindication, stoked the flames burning inside him when her hand fluttered towards her mouth on a gasp.
She righted herself the next moment, tearing her gaze away and muttering something in affirmation when her customer pressed a business card into her hand. A hand that shook, he saw with grim satisfaction.
More words were exchanged before the woman left the shop, doing a comical double take when she spied him close to the entrance. Then they were alone, and the air inside the shop grew too tense to breathe.
Taara remained where she was, her hands now gripping the counter but her eyes drinking him up as greedily as his had raked her from head to toe. Lingering. Almost caressing rather than just assessing. He watched her throat muscles twitch on a convulsive swallow and at last crossed the few feet to where she stood.
“Taara.”
She inclined her head the tiniest bit, her soulful eyes wide and with a dozen emotions swirling in their depths. Her face betrayed none of them, only mild shock.
“Luke.”
The laden silence stretched until they both spoke at the same time.
“Is this your shop?”
“What are you doing here?” 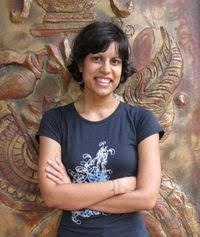 Having always loved to read and write, Devika Fernando made her dream come true in 2014 when she became a self-published novelist. The author with German and Sri Lankan roots has released more than 15 novels in the genres of contemporary romance, paranormal romance, and romantic suspense. Her trademark is writing sweet and sensual, deeply emotional stories with authentic characters. Many of her books feature multicultural couples in international settings.

Something Old, Something New is Live Now!! Get your copy here!!