Gudiya and Krishna two girls – one a widow, the other a child bride trying to make their way in a bigoted, biased world. A journey fraught with obstacles and a battle that seems lost even before it has begun. Bubble Wrap – the title had intrigued me the most as well as the blurb so I entered and luckily I won it in a giveaway. 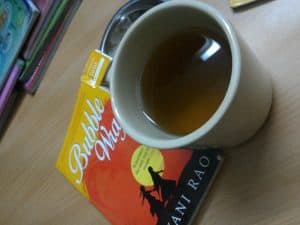 Krishna is married off as a child bride by her father as is the norm in their village and he thinks he has chosen well. A rich family, an educated son- in- law and a loving mother-in- law. Responsibilities, education, a new household, new relationships, deceit, and conceit, as well as crime take them for a reckless ride.

The secret box given to Krishna by her grandmother is her only security but is she able to use it? Did the old lady really understand the world this little girl was pushed into?  The box holds a key for Krishna and she really believes in it. She is sent along with the older widowed Gudiya as her help and support and both girls begin their life in their new home. Little do they realise that this is far different from what they expected.

The book is a most realistic commentary on the state of child brides and widows in our country. The story is based in Rajasthan and Delhi – it is unapologetic about the plot and reality of women as just commodities.

“Dadhi Saa, Maa and Gudiya in their black clothes looked like a team and rest of the family in disgruntled colors looked scattered. I wanted to be part of their team.”

Lines like this made reading this book a bit heart wrenching as the child, Krishna’s innocence comes to fore. As I read it was incidents like the double standards for Gudiya and Krishna, the very obvious fate that awaits Gudiya and the helplessness and apathy they face. The teacher, their unwilling partner was one who saw them as her reflection, prompting her into action.

Kindness from strangers and surprise help is what keeps the girls alive, barely. The ending was a revelation as they found themselves the very thing they were avoiding. An ending that left me wanting to fight for Krishna and the unfair fate meted out to her, but maybe in a way it was the right one from where she was left.

Bubble Wrap is a story for all of us as we will find Krishna and Gudiya around us regardless whether we go to a village or not. A soft thought provoking read. 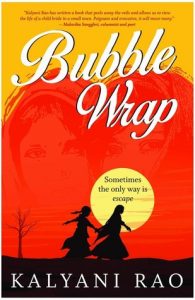 Twelve-year-old Krishna Singh has been married off to Shyam Singh of Rokhagadh, Rajasthan. Before the wedding, Krishna’s grandmother gives her a box filled with exquisite jewellery, telling her to sell it in times of trouble, but otherwise to hide it from her parents and in-laws. Accompanied by Gudiya, the fifteen-year-old widow of her cousin, Krishna realises that her cold marital home is a far cry from the loving one she left behind. The world outside has modernized and is beamed via television into her home. But she is not allowed to go to school, instead a female tutor comes home to teach her. A dubious father-in-law, a husband away at boarding school, and a mousey mother-in-law clearly show Krishna what is a woman’s place in this family. An unfortunate incident leads Krishna and Gudiya headlong into a series of events that change their lives forever. As they deal with one situation after another, the girls discover each other and learn much about the world they live in. Bubble Wrap is a story about their fight for survival against impossible odds in a shallow male-dominated society.