The Panchatheertha Part 1 by Rajiv Mittal 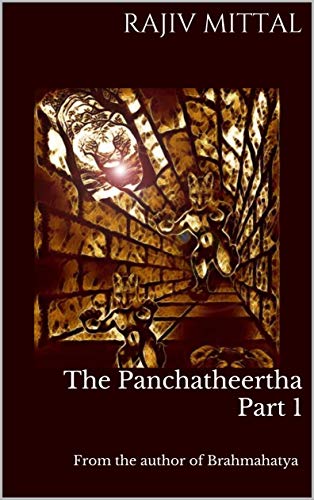 Rajiv has earlier written another book about the relationship between children and parents called . A story of revenge and redemption and deeds shaped by forces that humans believe they have defined through mythology and scriptures but still struggle to understand.
The stories are primarily about statecraft and full of wisdom and morals.
The Panchatheertha (five pilgrimages) is an outrageously funny, satirical revision of sections 1 & 2 of The Panchatantra, the masterpiece Vishnu Sharma wrote between 1200 BCE to 300 CE.

The Panchatheertha (five pilgrimages) is an outrageously funny, satirical revision of sections 1 & 2 of The Panchatantra, the masterpiece Vishnu Sharma wrote between 1200 BCE to 300 CE. The stories are primarily about statecraft and full of wisdom and morals. Despite that, youngsters found them very entertaining. In the tales, animals act and speak on behalf of human beings. The series begins with a parent story that unfolds story after story; each strung to the other by a narrator.

Vishnu Sharma’s reincarnation Shiva Varma has, in this redraft, revived the ancient Indian tradition of parampara (continuation of knowledge from one guru to the next). In his excitement, he forgot the younger age group of his shishyas (students). His characters now try to explain the motives for their actions, also express their feelings; something The Panchatantra had cleverly avoided doing. Within its pages, animals are still made to think and behave like human beings but have not otherwise been harmed in any way.

The Panchatheertha was considered lost but the discovery of two altered strategies ‘The Loss of Friends’ and ‘Gaining Friends’ should create hope within the large and growing community that has had considerable success with the first and complete failure with the second. Those wanting to meet Shiva Varma are hereby informed he dislikes economists, preferring astrology. He is in samadhi (seclusion / deep meditation) and not in hiding.

There are many intriguing characters not known to Vishnu Sharma in this adaptation; from a sex consultant plying his trade in the locality Ajilundpenodhoka in district Makasam… to a devadasi (courtesan) wanting to conduct the temple prayers because she is bored… to Sage Narada Muni !!

Bibliophiles are urged to read the original Panchatantra (which Shiva Varma did consider including as an appendix), to truly appreciate the extent to which history gets distorted when it is made to explain itself. Historically, the appendix has been viewed as a vestigial organ with no real function. This is why Shiva Varma chose not to include it… or so he claims.

“I was born in Chennai, India in the early nineteen sixties.  I now live in Melbourne after a stint of several years in the Middle East.

Writing was a vague aspiration.  It became a reality thanks to a stranger who said I reminded him of the main character from Desiderata by Max Ehrmann.  He quoted from it, ‘Speak your truth quietly and clearly; and listen to others, even the dull and the ignorant; they too have their story.’”

Click here to check out all the titles by the author…

You can stalk him @

Get your copy of The Panchatheertha