Midnight’s Star is an emotional book and one that reminds us that the world is not equal for all of us.

A hero who is disabled and a heroine who has enough emotional and financial issues to bury a town under make an unlikely pair in Midnight’s Star. This is the first book in the series of Shades of Night #1 with characters who have a quiet resolve and determination that makes them stronger together.

The book opens and sucks you in from the first page. Avni has just been dumped and Dev’s mother is trying to get him hitched in an arranged marriage on surprise dates!

Storyline apart, the language of the book is evocative and emotional.  Shilpa writes with her heart and with each book her prowess to pull out heartstrings is increasing. Avni and Dev make me believe in true love, happiness for all, and victory for the underdog. The one point I felt was a bit hurried was the ending when Avni and Dev meet and the mother just melts into the background. I wanted a bit more, maybe something from the mother or an acknowledgment of their decision since Avni’s father has an active presence in the book.

Handsome, kind, and successful Dev feels comfortable and cocooned with Avni. She feels wanted, needed and yet their insecurities drive them apart.  Even after seeing how much, they mean to each other they can’t seem to get together.  Independence is important for both of them yet they don’t understand it when the other needs it. Hardworking, cute, and all heart, Avni feels insanely attracted to Dev. However, circumstances make her feel inadequate.

Midnight’s Star is a fast, funny, and emotional read. I enjoyed the ARC sent by Shilpa Suraj, so glad to be able to read the book before others. I am eager to read the rest of the books in this series. Shilpa’s writing is becoming stronger, evocative, passionate, and hilarious with each new book. Not to forget the sarcasm and rib-tickling funny moments of family fun. I am a fan of all her books right from the first one—Rescued by Love

I loved how the author handled the disability in the book. It wasn’t just an eyewash but she actually had some positive used to make it realistic.  The moment when Dev realises that he is unable to see Avni dressed up for him was so heart-breaking. But is not just this, the book is filled with such moments.  It is done with sensitivity and presents a realistic view of both the positive and the negative views.

The author has the three friends Avni, Sehar and Diana who manage to create an equal amount of chaos and support as do Dev, Rishi and Manav. The camaraderie and bonhomie make for a shining example of why we agree, ‘friends are the family we choose’.

I enjoyed reading Midnight’s Star and finished it in a day, the only problem was that I wanted to read more!

I recommend this book for all readers, more so if you want to read an excellent romantic, contemporary fiction based in India.

I received an ARC of Midnight’s Star, review my own opinion. 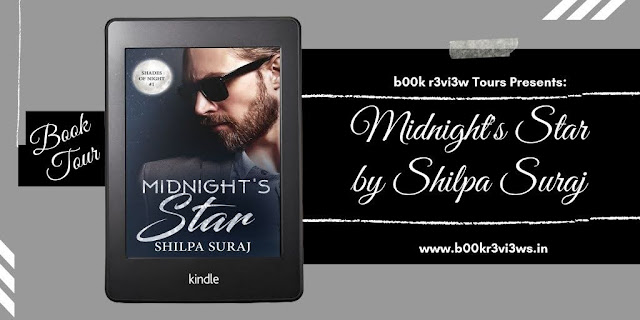 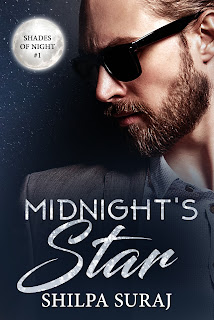 Visually impaired author and current flavour of the Indian literary scene, Dev Arya, has not just triumphed against the odds in his life, he’s annihilated them. He’s got fame, fortune and floozies in abundance. And yet, he’s lonely.
Cafe owner and only child to her differently abled father, Avni Desai is broke, heartbroken and a true survivor. But no matter how hard she hustles, she’s still struggling to stay afloat.
And then, one day, Dev walks into her cafe… and everything changes for both of them. From excellent tiramisu to earshattering singing, from dramatic friends to accident prone sexcapades, they embark on the ride of a lifetime.
Will it all be worth it though? Will two broken souls find a way to heal each other? Or do the fractures go so deep that there is no way for either of them to find the love they so deeply crave and yet can’t seem to have?

Read an Excerpt from Midnight’s Star

She sounded…warm. I’d gotten into the habit of identifying people by the way they made me feel. This determinedly cheerful, husky voiced café owner definitely made me feel warm. She was also honest. Her tiramisu was exceptional.
Across the table from me, I heard her spoon scraping the bottom of her own plate. At least she wasn’t one of those girls who was on a perpetual diet. I could never understand people who existed by just sniffing at their food and then swallowing one tiny nibble of it.
“You were right,” I said. “Your tiramisu is amazing.”
“I know,” she replied. “Actually, pretty much all of my stuff is amazing.”
“So modest,” I murmured, amused at her confidence.
“Except for my carrot cake.” She sounded perplexed.
I grinned. “I’m sorry but in my opinion carrot and cake are two words that shouldn’t go together.”
“Right?” she exclaimed. “And yet, people love it. Mine tastes pretty awful. I’m still trying to figure out why.”
“Why?”
“What do you mean why? I make horrible carrot cake. That’s why.”
“So,” I shrugged. “Don’t make carrot cake. Make something else. Something that you’re awesome at.”
“A menu of only tiramisu would be a bit restrictive, don’t you think?”
I laughed. Her sarcasm had me feeling lighter and more free than all the cloying sweetness I was usually surrounded by.
“I’m Dev Arya.” We hadn’t even gotten around to introducing ourselves to each other.
“Avni Desai. Nice to meet you.”
I smiled. There was something about her voice that made me want to wallow in it.
“So what do you do, Dev Arya?” she asked now.
“I’m an author,” I said, twirling my cane and waiting for her to make the connection. I usually didn’t want people to recognize my name and fawn all over me but some small childish part of me wanted to impress this woman.
“Hmm. What kind of books do you write?” she asked.
My cane froze. “What kind of books do I write?” I repeated. Was she for real? I was currently one of the most recognized names in the commercial fiction world.
“Psychological thrillers,” I said and waited for the squeal of recognition.
It didn’t come.
Disgruntled, I shifted in my seat. “Thank you for the company but I need to go now.”
She pushed her chair back. “I have to get back to work too. It was nice meeting you, Mr. Dev Arya. Good luck with your bride search.”
I grimaced. “It’s more my mother’s bride search. Anyway, good luck with your ex boyfriend thing,” I said lamely. How exactly did you describe what her ex had done to her? And I was supposed to be a writer and good with words. I mentally rolled my eyes.
I heard someone come up at that moment. Two someones, if I wasn’t wrong.
“These are my friends, Sehar and Diana and this is Dev Arya,” she said,
“I know. It is such an honour to meet you, Mr. Arya. I’m Sehar and I’m a huge fan.”
The voice was sleek and smooth. She sounded like expensive crystal, I reflected.
“Me too. I’m Diana. I’ve got a minor role in the OTT adaptation of your book, Just one more.”
An actress. She sounded like it too. If Sehar was crystal, Diana was champagne.
“Oh,” Avni said, sounding strange. “You’re a big deal?”
I grinned. “Clearly not a very big deal if you’ve never heard of me.”
“I don’t really read books.”
My heart stopped. “What kind of monster doesn’t read books?”
Sehar and Diana started to laugh.
“Not everyone is a reader.” Avni sounded miffed but I was enjoying teasing her.
“I don’t think we can eat Tiramisu together again,” I said, consideringly. “I have standards to maintain.”
Did she just growl? It certainly sounded like it but her friend’s laughter drowned it out. I decided not to push her any further.
“So, Diana, what role are you playing in Just one more?” I asked, trying to change the topic.
There was a brief pause and then she said, “The dead body.”
Uh. I wasn’t sure how to respond. The dead body appeared on my first page and just lay there while the detectives poked and prodded at it.
“I’m sure you’ll do a wonderful job,” I said, finally.
“Oh she will,” Avni said, matter of factly. “She’s very good at lying in one place and not doing anything.”
The three of them erupted in a riot of bickering and heckling. I let it all wash over me and soothe the sting of the earlier rejection. Everything felt a little warmer and brighter in that moment.
About the Author: 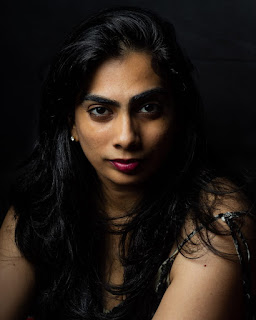 An avid reader with an overactive imagination, Shilpa has weaved stories in her head since she was a child. Her previous stints at Google, in an ad agency and as an entrepreneur provide colour to her present day stories, both fiction and non-fiction.


This post contains Amazon affiliate links.
In case you click on any of the links and make a purchase, I get a commission at no extra cost to you to help offset the cost to keep this website going.
As an Amazon Associate, I earn from qualifying purchases.