By Inderpreet on Wednesday, September 14, 2016
The motivation and ideas behind this different and intriguing book were discussed in detail when I spoke to the author and he shared his thoughts here.

THE MAHABHARATA CODE
by
KARTHIK K.B.RAO 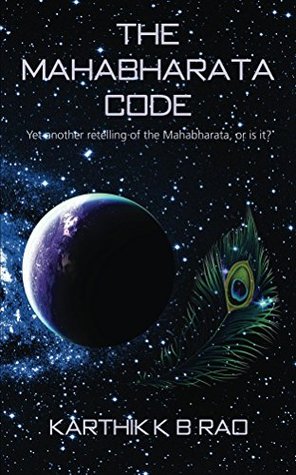 “The Mahabharata Code is a personal account of the main protagonist Narayan Rao (NR), who claims to be an astronomer with NASA. NR and a few other crew members agree to take part in the NASA mission to visit this mystery planet from which they had received mysterious signals. Here, they meet a man with a long flowing white beard, and he introduces himself as Vyasa. He reveals that he has a crazy plan in mind and seeks NR and his members’ help in implementing this plan. He intends to recreate the entire Mahabharata on this planet to restore the faith of the primitive simpletons here.
As the Mahabharata incidents start unfolding, NR realizes that Vyasa intends to recreate them page by page here, if not paragraph by paragraph. Also, NR begins to realize that his son, Krishna, who is being groomed by Vyasa as Vishnu’s avatar, is nothing more than a pawn in Vyasa’s scheme of things. Other incidents of Mahabharata also unfold according to the original epic. Pandavas and Kauravas grow up hating each other and finally the restaging plan culminates with both the warring sets of cousins facing each other in the battlefield of Kurukshetra.
Inexplicably, like the original epic, Arjuna develops cold feet seeing his own cousins, teachers and relatives on the opposite side. He seeks Krishna’s divine intervention. Is the brainwashed “alien” Krishna prepared for this intervention?” 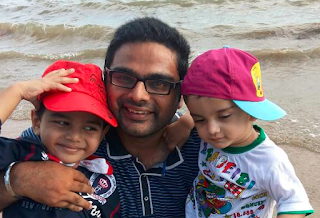 Karthik K.B. Rao
Karthik Rao is a 32-year-old software professional based in Bangalore. He lives with his wife Sushma, parents and two little sons Kaustubh Krishna and Raghav Krishna aged 4 and 1, respectively. He says, he gets to meditate close to 3 hours every day on his bike thanks to the notorious Bangalore traffic. His hobbies include following cricket, Indian politics on the social media and Indian mythology. He also plays plastic ball cricket with his sons.

You can stalk him @

a Rafflecopter giveaway
This Tour is Hosted by