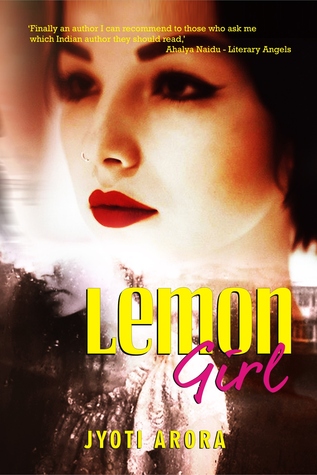 Lemon Girl is a story of a girl who was once spunky, boisterous and fun loving girl hence the name which is quite apt. Though the story which is told partly by Nirvi and partly by the boy who falls for her, Arsh. This is a different yet effective way of putting across the different points of view. Even Nirvi and her inner voice of Lemon girl makes her presence felt.
This is a story of a girl who has had life dealt her a bad hand as is the case most of the times it was no fault of the girl. The story starts from the time Nirvi is remembering who she was after a fight with a colleague. The story moves from past to present time and again. A lot of back story and events are covered in flashback. At times I found the same event being seen through the eyes of both Arsh and Nirvi. It is a kind of his and her viewpoint throughout the story. I lost the thread of the book due to this making it hard for me read it. It is a book which will make you think and feel for the scores of girls who face abuse and ridicule in real life.
The story progresses and even though they both have nothing in common their paths cross time and again as if they were meant to be. Arsh tries to be friends with her but Nirvi has her own reasons to avoid him. A cat and mouse tale follows with both having their own love interests but still longing for each other. They themselves are not fully aware of the result of their actions.  That they keep yearning for each other is quite obvious.
The cover of the book has a beautiful girl but she looks a bit sad, perfectly reflecting the story of the book. it seems the cover has Nirvi and not LemonGirl but them they are one and the same so we keep seeing her glimpses. I liked the vibrant color of the book, a reason I picked the book.
What I found really odd was that even though Nirvi is such a strong girl she is easily defeated by words and tries to take the negative path. Sad but I found her own blame game at odd with her conviction. Even though the premise of the book is very solid and the story, secondary characters of Sam and Tiya  are all well fleshed out I found the self destructive attitude a sad. I believe in the power of positivity but as a victim one cannot help be miserable.
Till the very end of the book she is not finding inner peace but trying to prove a point to all those who told her “‘It’s all your fault.’” The author has dealt with the topic of incest and the typical reactions of people in such cases. I commend her effort of bringing the plight of the victim to light. The read is a bit heavy but puts across a poignant tale of love and longing. The need to be loved and cherished by our loved ones is paramount and if you find none – how do you go on?
Lots of questions and thoughts are brought out in Nirvi’s story with the Lemon Girl finding herself once again.
(© I won a copy of this book in a contest by the author on Facebook, the review is my honest opinion.)

‘It’s all your fault.’
Mere words these are.
“But words can possess a shadow invincible enough to rob even a soul of its eternity.”

In a society that finds it easier to mark sins of a victim than the culprit, Nirvi is a young girl punishing herself for the faults she did not do and avenging her hurts by defeating her own truth.
She is scared of her future, and ashamed of her past. She is failing herself, and knows it. She has had a long line of boyfriends, and hated them all. She detests the guy she is living with, runs away from the one she loves , and seduces the one who can never love her.

When Arsh first sees Nirvi, she’s a free and frank girl in whose eyes sparkle the lemony zest of life. The next time he sees her, she is a voiceless doll draped in clothes that cover her body less and shroud her soul more. And Arsh can’t rest till he finds out what made Nirvi give up her own real self.
Nirvi knows she is dragging herself on a path from which there can be no recovery. Can her spirit survive the treacherous downfall? Or is the pull of fear and push of desperation just too strong to withstand for a girl who believes she has “nowhere else to go” but down.

“When it’s time for you to fall in love, even a lemon can become the cause of it,” says Arsh.
But can love survive, when even the self love dies?
Can love survive when respect is no more?
Does true love have the power to revive a dying soul?

Find out in the pages of this brilliantly woven, intense, heart-warming and thought-provoking saga of RISING IN LOVE…