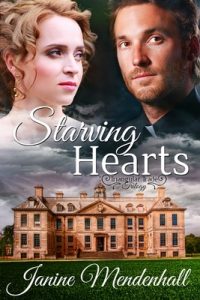 Starving Hearts is a historical romance and it grows on you as you fall for the charming Annette and gracious Peter. Smooth, serious, full of love, faith, and a kaleidoscope of emotions is what Starving Hearts is all about. We have the alluring and very vocal Annette as the heroine. Peter is the hero, savior and the victim all rolled into one. That he is a pastor and hopes to spread the Lord’s word makes him more upright and a thorough gentleman.

The author has a merciless villain and the inhospitable era of slave trade as the backdrop of this book. Slike is a man of many shades and vices, he propels the story forward with his conniving and conceited plans. That he has a softer side is rarely shown and yet for me the villain had almost overshadowed the hero in a couple of places. I was afraid he had won yet Peter prevails as he survives and struggles but never gives up as he has his faith tested and challenged but he holds on as the novel is a fine balance between the faithless and the ones who challenges him.

Annette, delicate, educated and quite fetchingly beautiful is a maiden of that bygone era. She has her own set of problems along with an uncaring mother and that one issue which plagues her health. Peter is her saviour and suitor rolled in one but what a troubled and tangled path to finding their love!

There are so many layers to the story, the deceit of Slike, Peter’s Father and his sneakiness, the behaviour of Annette mother, Peter and his relationship with his brother. The pretentious, conniving and disgraceful moneyed class and their wealth, business and treachery. It shows how the fortunes were made and broken with just a rumour or relationship.

The meeting of the lovers almost seems impossible, they come close only to be separated for months even years. The author, Janine Mendenhall has written a story that transported me to the era of the height of English culture and when the British Empire was spreading and at its strongest.  If there were grand galas, dinners, and seasons it was coupled with slave trade, death, and disease. Opulence and greed, poverty, and lives taken for a penny – turbulent times indeed!

I recommend this book for a detailed experience of the bygone era and how a look conveyed the desires and demands. A hint of romance and a good dose of the Victorian era makes Starving Hearts quite an interesting read.

Since her assault, Miss Annette Chetwynd has been plagued by nightmares and worries about an arranged marriage.

She yearns to find her anonymous rescuer. Unfortunately, her health and intellect prevent it. Both repel suitors and cause Annette to doubt God’s existence, at least until He answers her prayers in an unusual way. . . .

Mr. Peter Adsley is joining the clergy, and he desires a godly wife by his side. After a failed attempt to obtain one, he engages in a clandestine meeting with the bewitching young woman who keeps crossing his path. But she is so unsettling.

Destined for disappointments, Peter and Annette both endure disgraceful situations. Will Peter’s faith sustain him through overwhelming setbacks? Can Annette overcome her doubts? Or will their starving hearts yield to the machinations of a mad man?

Janine Mendenhall teaches teens English, of all things! Sometimes she sleeps, but most nights she reads, writes, or watches movies like “Pride and Prejudice” and claims she’s researching her next book. “Splickety Love” and “Splickety Prime” have published her flash fiction. She and her husband, Tom, live in North Carolina where they and their two golden retrievers help gratify the needs of their five children and two cats.

Find out more about Janine at  http://www.janinemendenhall.com.