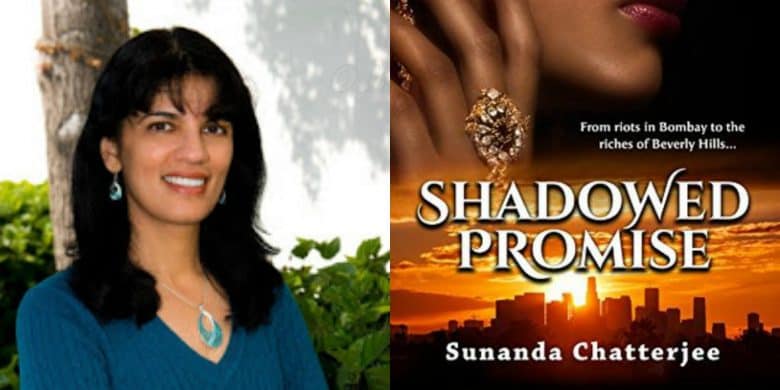 Shadowed Promise is Monya’s story, a girl who has lived with blame and doubt all her life. She struggles her way to make a better life in another country yet the strings she thought had been severed call her back. Acceptance of her past is her only redemption yet it almost destroys her.

Long post Alert!! I loved it too much to write any less!

Moyna is one tough cookie, she stands by her words when she is chucked from her house not once but twice. Having earlier read Sunanda’s book Fighting For Tara I was not disappointed with this one as well. The strength, resilience, and fortitude that hardships bring to a person are amply showcased in this book as well. It is an emotional read with so much substance with depth and touches the issues like riots and death of near one and its impact and how our lives change due to it.

Sameer is her anchor as both of them find each other during college and fall in love. The twist in the tale of how they connect and are attracted to each other is awesome. Sunanda added so many layers to their love story that I was astonished in the end. The knots are solved, the mystery is cleared and the connections made. How destiny brought them together, the painting incident was quite surreal!

The book gives an insight into the immigrant life and the challenges they face – a blend of east and west. Quite perfect for our lives today.  The characters jump out of the book, Tania for her short stint, even the vile mouth Kakima has her moments. Sameer, her friends Karan, Lupe, Aaron, Mr. Singhania and even Fiona make it very believable and real.

What made me a bit crazy was that I just found Moyna’s inability to read the letters immediately when she got them, the curiosity alone would have killed me!! No matter what the content I would want to read them together and as soon as possible. I thought she would never read it!! Another thing odd was the fact that both the kids were very intelligent, brilliant in fact. I found it a bit difficult to accept that in the book Shadowed Promise.

The scene with the paparazzi was so distressing and the irony of a birth and death yet the media doesn’t care! The meeting of Moyna and Bashir is so loaded with emotion but the author builds up to it with the role he plays in helping Kakima and Avinash as well as others in the community. We find very few examples of people who get a chance to atone for their sins and embrace the good side. A fine balance struck by the Author. Her writing is sublime, simple and quietly lures me in as a reader.  The twists and turns keep the pace of the book making it an absorbing read.

A challenge indeed for any mother which she faced is the promise that Moyna makes almost costs her all that she holds dear but it doesn’t weaken her resolve to mother the motherless boy. Shadowed Promise is an emotional story with so much depth and love. Monya is scorned yet she spreads love where she goes – may her tribe rise. 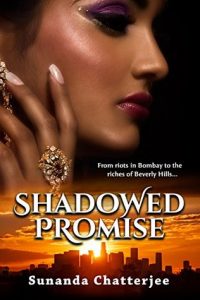 Moyna’s cousin panted at the doorway, heavy with child. “Who did this to you?” her father shouted. And Moyna knew that somehow she would be blamed for this unspeakable shame on the family. Her aunt blamed her for all the tragedies, from the death of Moyna’s own parents to the riots in Bombay. But, as her cousin lay dying of stab wounds, Moyna promised to protect the baby.
In a panic, eighteen-year-old Moyna made a hasty decision that would return to haunt her years later.
Bullied as a child, Sameer wants to make the world a safer place.  He has spurned a cushy career in his father’s law firm for public service. Sameer is drawn to the mysterious Moyna when they meet in Los Angeles. The attraction seems mutual, but Moyna remains cautious and secretive about her past, insulating herself from love to protect others from her unlucky curse.
At the cusp of political victory, Sameer faces increasing gun violence and death threats leading to an FBI investigation. But his greatest challenge comes when a shadow from Moyna’s past threatens to destroy their future.
What hope do they have with the media hungering for a scandal?
A story of friendship, redemption, and forgiveness, “Shadowed Promise” is a journey from blind faith to triumphant love.
#romance #fiction #thebookclub BEST INDIAN AUTHORS TO READ book review contemporary fiction contemporary romance. fiction INDIAN AUTHORS love Renee @ Mother Daughter Book Reviews romance women
1
Previous Post
Next Post