My son had been watching the ad for #ColgateMagicalStories on the TV and wanted to play with them. He had been asking for the packs, asking me to get hem like last time from Blogadda. When I told him about the #ColgateMagicalStories and that this time the stories were of astronauts, space, aliens and all the planets he was super excited. He had it all planned and was eagerly waiting for the package to arrive. We had recently seen the movie The Martian on TV and my 7 year old had been awed by the efforts and dedication of the hero Mark Walberg that he wants to know all there is to know about space.

The Colgate “Magical Space Adventure” has three different sets based on the ‘Magical Space’ theme to cut, play and learn – explore the mystical Alien Planet, float around the zero gravity Space Walk and experience the thrilling Space Launch. With more than 15 space characters, these packs will take kids on an adventurous journey into the magical space world. These packs are an opportunity to learn while having fun. The kids can create their own secret universe thereby expanding their creative canvas.

He was in for a big surprise or what! We had participated in the previous activity as well and had just the packs/ cartons but this time it was not just the pack but three tubes of toothpaste as well. He wanted to use them all at once and now refuses to use any other tube of paste. I am so glad that he is following our faith on Colgate and no worries for his teeth now. 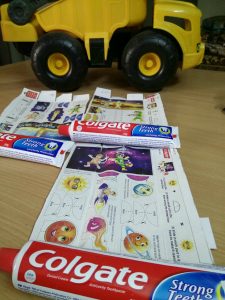 As soon as he got his schoolwork out of the way we sat down to cut and arrange the characters and planets and the mean old alien – the green guy had so much to say. We had fun cutting out the planets and the smiley sun was the cutest one. As we were cutting them all it was a bit difficult to move around the curvy outlines for some of them, of course, he had help from me. He read each description on the cut outs and added that he has learned about many of the planets.

As soon as they were ready, he laid them out on the table, neatly arranging them according to his story. He did not want them on the stands like last time, instead wanted to slide them around as his story progressed. He narrated a very interesting space odyssey.

“The astronauts were ready to be launched into space and as they moved into their spaceship, the crowd cheered. They were going to conquer planets and meet aliens as they both traveled through space. The astronauts soon blast off into space and land on the space station for delivering supplies.

Soon they move to the next stage of their space travel. As they move deep into space and move to the different planets. They encounter an alien on mars! The alien Martian is out to fight with them, just by their intelligence both the astronauts defeat him and make friends with him. The green man then invites them to their planet and shows them around. They use a space truck, the truck with the big tyres to explore the terrain around the planet.

They send out a robotic vehicle to the planet to collect information about the place. Soon both the astronauts leave Mars and travel to further planets. They encounter an asteroid and avoid it path. Then they continue their orbit into deep space and explore many different space events.

The finish their mission and turn their spaceship towards earth and head home.”

My son was very happy with the characters and has been sending them on various missions. He was even playing with them with his friends. This is such a creative activity for the kids, new things to do, new ideas to explore. Learning and so much fun!

“I’m blogging my #ColgateMagicalstories at BlogAdda in association with Colgate. 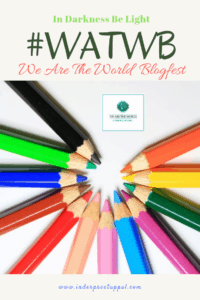 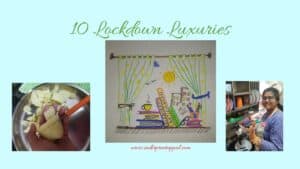