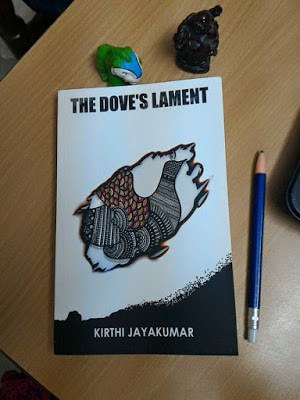 I had eagerly picked up The Dove’s Lament, reading it and hoped to review it before I went for my holiday to Leh and beyond. (No connectivity) Yet as things happen, this book and another one, also short stories got left behind at home in the mad rush to catch the fight at 5 in the morning with my kid, a toddler and her mom!
That I missed the book was a fact and I think it still worked in Kirthi’s favor because I talked about the book, recommended the book and even promised to share my copy of the book with a close friend. Even though the book was not with me yet it made its presence felt, such is the impact of The Dove’s Lament.
The lines of the Author’s Note end with, “I can feel the sufferings of millions and yet, if I look up into the heavens, I think that it will all come right.” is truly the crux of this book as said by Kirthi Jayakumar.  It is so commendable that she has written a book about the innocents lost and murdered yet the survival of humanity is the message that comes across. The most outstanding thought or vibe that runs through this book is that even though it has so much terror, evil and mindless killing yet the author’s view of humanity is so positive as she cherishes compassion and the strength of doing good.
The book might have been named The Dove’s Lamentbut it is a song of hope, faith and perseverance and not a lament at all. Each story brings together the atrocities of a different country but the melody is same. The author’s voice shines through with her crisp, clean language. She talks of diverse regions yet binds them all with one language; her words, her hopes and heart. Except the names and places which identify the different regions of the world these stories could have been in your own town or city.
That the book has gained so many accolades and is being appreciated across the board is a benchmark of the talent of the writer. For a young lady her writing has so much power, impact. I could go on writing about her writing and skill of expression but I am sure you get the idea. She expresses without being maudlin and shares without making us cringe. Instead the horrors and atrocities being narrated through survivors or people who suffered make a stronger impact urging me to read on, searching for the ‘silver lining’ in each story.

There are 12 stories in the book and each one talks about that elusive feeling of peace and familiarity that the victims search for through death. Yes, the stories are a bit gory; they do unveil the terror and madness we humans inflict on each other in the name of religion and country yet I found the stories deeply moving.
They do not disappoint; each tale whether it ends in death or survival has hope enmeshed within it and that is what works for The Dove’s Lament. Kirthi’s pen paints such realistic images that in the GenocideI too felt flames obliterating everything, the blood bath coloring me the same as the nameless mother searching for her Habimana. I felt compelled to search with her; such is the power of her words.
Kirthi’s writing, expression, the neutral spectator like flow of the stories make them more powerful but to say it is all Kirthi’s talent would be unfair; the stories needed to be told, shared and the world needs to hear more of them. Her writing transcends an already powerful element, the truth or reality of our world as her view is unbiased.
The one thing I felt while reading was anger due to my inability to take action or help the victims even though the incidents happened long ago. Like those photographers of National Geographic who stand by and film as the jackals devour the innocent cubs. Little did I realize Kirthi was helping, trying to save whatever is left as her book is a plea for help; it is not just to be read & applauded but used as a wakeup call for us to strive for saving what is left of our humanity.
Fire In A Ring Of Ice, has so many powerful passages that I read it twice, once to read and once to feel the words seeping into my mind settling underneath my thoughts. The other stories too had their message put across so simply.
Desiccated Land spoke of Salix – willow, the tree that never breaks but bends.  It taught me that if only all of us tried to be more like her. The sadness, mindless violence all just highlights the goodness even more. Princess was quite an obvious tale but well written.
A Night to Remember made me wish for more nights of such liberation. If only the solution was so simple.
Explosion – this tale was so familial in its tale, this is what would happen in any family filled with loving members.
Imprisoned was a bit predictable yet the ending was heart wrenching yet it was the last tale, Esther’s Story ends the book on the best possible note. One, the connection between the first and the last story, two, the search for Habimana continues hoping for a reunion. The message of courage, hope and faith comes across loud and clear.
“One never wants to leave the world even if death is a release, for none have the guarantee that the other side will be welcoming enough.”
I have read many books on violence, terrorism, holocaust and mindless violence that I consciously moved away from such books but this book is different. The evil itself is the messenger, a harbinger of good, waiting for the mankind to shine.
If there is one book you want to read this year, let it be The Dove’s Lament.
The Dove’s Lament
by
Kirthi Jayakumar

The Dove’s Lament is a journey that takes you around the world, bringing to life the human side of conflicts that tear people apart. From the genocide in Rwanda, to war-stricken Bosnia, from child marriages in India to prostitution and drug trafficking in Colombia, these stories traverse a microcosm of reality. Be it the manifestation of Bacha Baazi in Afghanistan, or the fight for paradise on Earth, Kashmir, the repertoire of stories lend a soul to what otherwise remain a muddle of news reports and statistics. Through these stories, Kirthi embroiders a tapestry of the unvanquished human spirit in varied shades, and shakes you up to the reality that surrounds you.
Buy @
Amazon.in | Amazon.com | Flipkart
Meet the Author

Kirthi Jayakumar is a Lawyer, specialised in Public International Law and Human Rights. She has diversified into Research and Writing in Public International Law, Arbitration and Human Rights, besides Freelance Journalism. Working as a UN Volunteer, specializing in Human Rights issues in Africa, India and Central Asia and the Middle East, Kirthi has worked extensively with grass root organizations that focus on women’s rights, and also run a journal, academy and consultancy that focuses on International Law, called A38. Kirthi is also the founder of the Red Elephant Foundation, an organisation that works for the empowerment of women.
You can stalk her @