A thriller laced with love, Shadow In The Mirror is the story of Krish and his wife Nita and her untimely death that is assumed to be a suicide. The opening page of the book is about her death and her thoughts when she is falling. It is a powerful narrative and Deepti keeps the flow going. The story is paced well and something or the other keeps happening. Deepti was able to keep the mystery of the killer and who is trying to frame the killer till the very last pages.

M B Madhav was a well-explored character. As Nita’s father, he had a heavy burden to bear but he did it with élan. The agony he faces left me feeling so sad for him. He along with Vinny’s parents Sudha and Eshwar, as well as Krish’s parents Vinod and Vaishali, filled the book with love. It was solid, heartfelt, never giving up kind of good love. I found that Deepti has made their stories and love as an homage to the love of yesteryears and of our elders. When forever really meant forever and marriage was an unbreakable bond.

Mrs. Peter, the guardian, and teacher for Krish was the sweetest character and I could see how the author had paid respects to her wonderful teachers. I loved reading about her. We need more like her.

Yamuna was scary, deceitful and irrelevant and I felt she was like Roma – self-absorbed. She came across as a person who had nothing to say or do but I felt the importance given to her was not apt. She was just a bad person but I wonder if it was her impact that added a negative layer to the story and the people around her. I cannot say more since I do not want to give away the story.

Few things that made an impact in the book were the strong characters and their etching. Kavita – evil, convoluted and plain old crazy. I think she was pure evil or just too deranged but I could see a fine line of awareness in her actions. It is just the ending that gave too much importance to her. I would have liked her to have met match but Krish definitely was the ‘better person’. Sadly, love is not enough sometimes.

Vinny was the thread that binds all of them and she did her best to keep it all together. She is the one who goes searching for the truth. The discrepancy I found was that initially, she was a reporter looking for her ‘big story’ and by the end of the novel she is an established writer and leaves the paper.  By the time she reported the story of Nita’s murder she is a changed, matured individual.

Another thing was the number of characters that had no role to play in the story but have chapters devoted to them. As each character is introduced, we have a back story about them which are interesting but did take a bit of time getting used to as I tried to grasp all the threads. Roma, Rohit, Meghna and Gautam – The only link was that Roma was Vinny’s friend and neighbour. She had no role to play in the story and her life story was a parallel thread to Nita’s story who was the main character but I could not find a connection. Was their story a rouse to sidetrack the reader from finding the real culprit? Only the author knows her mind……

Finally, when the friends meet and Meghna enters her house there was no information on how she came back and what she had been up to. For quite a while I kept thinking she was connected to the murder!

It is an interesting story once you get the hang of the characters and connect the dots. Overall, it is a good book and I enjoyed the ‘evil’ part of it. Trust me, I have met people like them – who you say? The ladies who touched Nita’s life with evil and destroyed families.

I liked that the author gave closure to Krish and made the story about living and not dying. A bittersweet tale of love, loss, and life. The shadow is lifted – almost. 😉 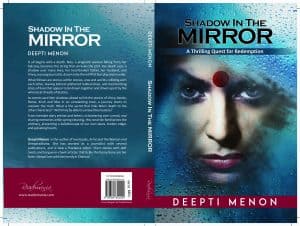 Shadow In The Mirror: A Thrilling Quest for Redemption

It all begins with a death. Nita, a pregnant woman falling from her balcony becomes the string that unravels the plot. Her death casts a shadow over many lives; her heartbroken father, her husband and Vinny, a young journalist, drawn in by the whiff of foul play and murder.
What follows are stories within stories, eras and worlds colliding with each other, leaving behind splintered relationships and mesmerizing slices of lives that appear to be drawn together and driven apart by the whimsical threads of destiny.
As events cast their shadows ahead to link the stories of Vinny, Kavita, Roma, Krish and Nita in an unrelenting knot, a journey starts to uncover the truth. What is the secret that links Nita’s death to the other characters? Will Vinny be able to unravel the mystery of Nita’s death?
From intimate diary entries and letters, to bantering over a meal and sharing memories while spring cleaning, this novel de-familiarizes the ordinary, presenting a kaleidoscope of our own pasts, broken edges and pulsating hearts.