A TANGLED LEGACY Past & Present Collide In Love @JustJazzSingh #BookReview A Tangled Legacy is a love story where impediments are all around love yet it triumphs. Two kindred spirits yet they can’t decide to stay together. This is a story of Karan, the hardnosed, cynical businessman and Jahnavi, the sweet, whimsical girl. The two meet in London as strangers and find a connection yet are hesitant to explore it. They eventually find themselves on the opposite sides of the bargaining table since Karan takes over her father’s business.

Add to that his own misgivings about being a child born out of the wedlock Karan finds himself less than perfect for Jahnavi. She too falls for him but her father’s business, its takeover and the repercussions make for a situation where both are unsure whether to follow their heart or the mind.

The book, A Tangled Legacy explores the impact of a mother’s action on a son’s life. How being an unwanted child tangles his life and love. His own hesitation and anger at the love his mother felt while he too falls in love and finds himself helpless except to follow his heart.

The author, Jazz has portrayed the angst and dilemma faced by Karan and Jahnavi for their choices. A man who is yearning for acceptance, his past and his money makes it impossible for him to find love or even a friend. A woman who is burdened by her family and its expectations. They both need each other yet who to take the first step.

The past of the mother and her actions lead to consequences even today. Karan is deeply affected by it and the results are damaging to all his relationships. The parallel story of his mother takes centre stage often in the book and needs its own book. The author has written the sequel to this book, A Tangled Legacy called Untangled (Tangled Series Book 2)

Overall, A Tangled Legacy is a love story but with a lot of angst and many other characters that are vying to tell their story. Even though Jahnavi and Karan find each other the book still has a lot of legacy to explore. I am off to read the next story of Karan’s mother and her choices in Untangled. 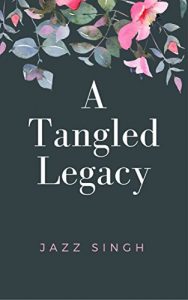 The instant attraction between Karan and Jahnavi is doomed before it can blossom into something deeper when he becomes responsible for her father’s illness and a downward spiral in business. Known as a predator in the business world and a bastard in the media, he cannot forgive his mother for the unwavering love she bears his unknown father, the man who abandoned her…and his son. Then there’s Jahnavi, his dream woman. How can he ask her to accept his love and share the shame that is his burden?