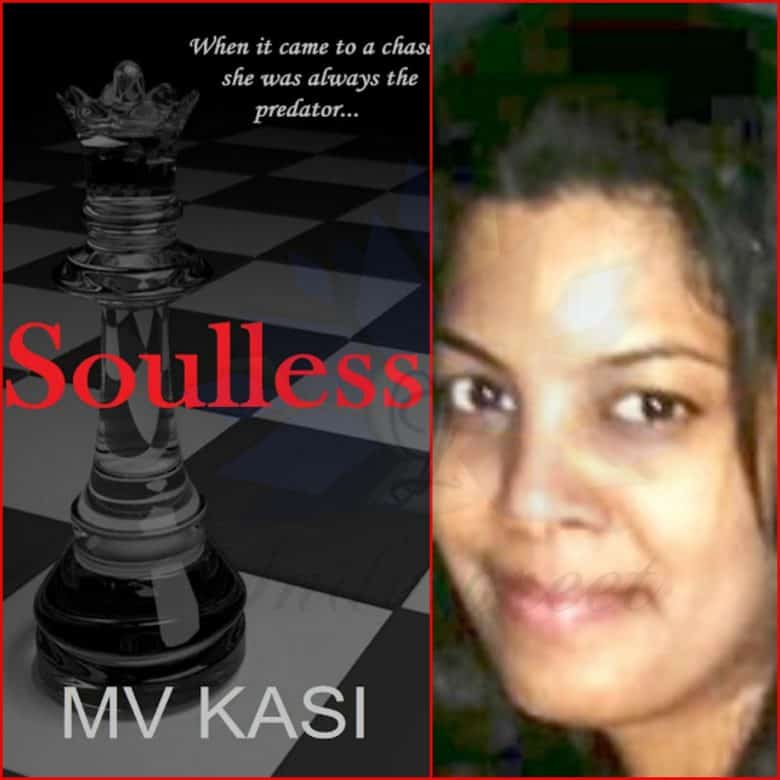 SOULLESS is the story of Sia who is cold, calculating and out for revenge. As the story progresses it becomes clear she was wronged. Abused and manipulated she manages to get the details of her abuser and wants retribution. She plans to exact revenge involves fulfilling the conditions so she can reclaim her parents fortune. She is rich but belongs to an even richer family unknown to most.

She meets Ajay who is kind, handsome and a challenge for the cool Sia. There is instant chemistry and they fall for each other. Even though it is quite a chase! This is not a typical love story, especially since there is very little love in the book. It is more about lust, revenge and killing the silent demons that nightmares are made of.

The story works on many levels as Sia and Ajay are forced to be together. They have no choice or so it seems. The plot has some twists and surprises that make it a fast read even though the starting was a bit slow and it took me a couple of chapters to figure out what was she up to.

The supporting characters of Anjali, Jo and Varun add to the mystery of the book. It is not a romance but a hot thriller. It also reminded me of the premise of the very successful, The Crossfire Series by Sylvia Day, which has abused and damaged individuals finding love and acceptance similar to Soulless. M V Kasi has managed to pen this book with a good balance of hate and mistrust even as love struggles to survive.

The language is good but could do with a bit of proofreading, just some mistakes that seem to have been overlooked in a hurry. The story kept me reading since the story was so heart touching as I imagined Sia as a little girl facing the world alone. She tries to be a heartless person but is not always successful and I could see her falling for Ajay. He too becomes a friend, a bit reluctantly at first.

I was disappointed to know that it was not mentioned the book has a part two when I signed up for the book. I was half way through the book by the time I knew so now I wait for the finale. The book has a second part – Ruthless and I eagerly wait for it so I can understand all the connections between Varun, Anjali, Sia, and Ajay. They need to have their story told.

The book gains momentum during the middle and it took me a few chapters to warm up to the story. Sia’s nightmares and Ajay’s concerns made the story interesting. The little details made me want to know more about the characters. The author has managed to bring all elements together. This is an interesting read, a story about revenge, victimisation and a survivor story to the core.

I regularly publish book reviews on my website/blog, drop me an email at [email protected] if you are an author/publisher and want me to review your work.

They say when you take revenge you lose a part of your soul.

But Sia hadn’t felt her soul in a very long time. She only knew the feeling of soul-crushing fear and helplessness. Especially during the nights, when she fought an invisible enemy that terrorized her during the nightmares. Her days weren’t any better either. She spent them desperately trying to gain control of her life while battling her various fears and addictions.
She was only twenty-three, but she had resigned herself to live the rest of her life that way. Fearing the unknown. Until it all changed one day. Now she remembered. And she knew. She knew that the monster from her nightmares was real.
And also that her soul had been ripped apart from her.
The memories brought in fear, rage and pain, along with a strong craving for a swift payback. But revenge was a dish best served cold. And it required a complete absence of emotion. So now? Now she plotted. And she schemed. She prepared herself in every possible way to hunt and destroy her enemy.
But every mission, however well planned can go awry. Sometimes it’s because even though one can be soulless, there is always the heart. A very weak and desperate heart that was being stolen by a man. A man who was like a bright spark of vivid colors in her otherwise dark and dreary life.
A man who was only supposed to be collateral damage in her ultimate war.