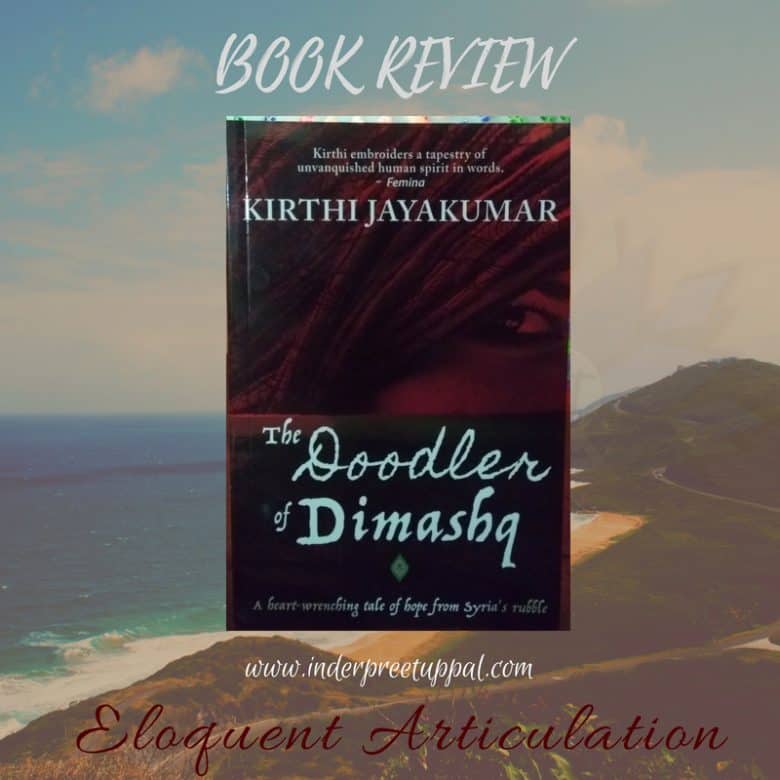 #TheDoodlerOfDimashq is the story of Ameenah, a young girl struck in war-torn Syria. She is special only because even in this ravaged, rubble that is her country she looks for beauty, for art and tries to leave a mark for those who are dying in the war. A war that she did not ask for, the dead did not ask for and nor did the small children she tries to shelter.

Her way of saving her sanity, bringing a semblance of normalcy to the kids is doodling or drawing. She with the help of her friend, Qudsia who gives her shelter after she loses her husband and his family as well get papers and colours for the little children they shelter.

Ameenah’s way of facing the war and the daily deaths around her is through art. She takes a tile, a piece of wall and with the ashes of the city makes doodles in remembrance of those who died.

Kirthi is no stranger to the pain and devastation that war and terrorism bring in its wake. I was bowled over by her debut book, The Dove’s Lament and in this book, #TheDoodlerOfDimashq she delves deeper into the pain, unfairness and pathos of war and insurgency.

I felt the subtle traces of love between Fathi and the poem he narrates was so beautiful. Captured so lovingly, gently in spite of a marriage out of the necessity of war. The poem by Nizar Qabbani is so soulful and apt I fell in love with his verse and am glad I found a new port to read.

Another aspect of the book that I loved was the tiny square tiles of doodles she had before any chapter. A tiny explanation and the easy doodle, I felt as if it is a simple initiation into doodling. If I do a single pattern each day I would learn it so easily, a creative pursuit that relaxes and rejuvenates.

The girl, Ameenah saves many kids as possible, tries her best to keep them safe but when it all seems futile a ray of hope Rami and along with Maryam offer a glimpse of a better future. She takes a chance but war does not see, it only ravages and obliterates. Such is the bittersweet story of The Doodler of Dimashq. Kirthi pens this book from her heart and it takes the reader along. Immersing them into the world where hope survives even if nothing else does. The Doodler of Dimashq leaves a mark—on this world, in the story and in our lives.

This book is a stark reminder that all is not well with our world, the innocents, and the helpless need our support, our voice. #TheDoodlerOfDimashq speaks up for all of them, in Syria, in Nigeria, in Mexico, just about everywhere. Lynching’s, mobs, terrorists, mafia, an evil that invades our lives and must be talked about, must be stopped.

The Doodler of Dimashq is an emotional, thought-provoking, fast-paced, well-written story of Ameenah and her journey to peace. She finds it but not as she expected it to be.

#TheDoodlerOfDimashq: A Heart Wrenching Tale of Hope From Syria’s Rubble

What would you do if your world comes crashing down around you?
Caught in the cross-hairs of a raging civil war in Syria is Ameenah. Displaced unexpectedly as a child bride, she navigates out of the heart of Damascus and plunges into the ancient city of Aleppo. Her voyage of self-discovery is a heady mix of the personal and the political—and the maddening noise of conflict weaves a fabric that entangles her with the lives of many around her.
As missile after missile brings the city down into a hapless pile of rubble, Ameenah builds it back up with her simple act of resistance—doodling.