He Loved & He Lived #TheWrongTurn by @chopey26 @Bodhisattva165 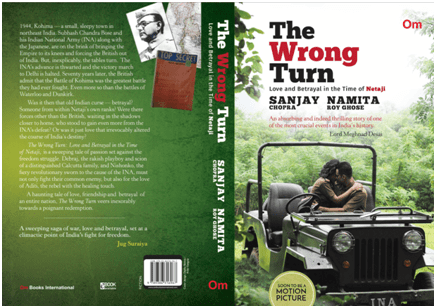 The Wrong Turn by Sanjay Chopra & Namita Roy Ghose actually has one of the aptest taglines I have read, “Love and Betrayal in the time of Neta ji.” The book is a love story set during the freedom struggle and the time when Netaji Subash Chandra Bose was raising the INA. The characters are introduced by an old man who talks of those long gone days, the brave men, and women and we are unsure who he is till the very end.  The love story, the struggle for independence and its impact on lives as well as the mystery of the book about how and why India lost that campaign started by Netaji for India’s freedom and supported by Japan.

The love story is the core of the book while the lovers work their way in the INA – Indian National Army. The Wrong Turn is a patriotic, love filled, emotional book that will surely leave an impact. It is a big book at 488 pages but I kept turning the pages as the story and character had me hooked and the story needed to be told. In this age of quick reads and novellas which I enjoy, The Wrong Turn satiated the reader and book lover in me with a story well told.

What I liked best was the author’s writing – it is evocative, crisp and transports the reader to the places and images described. I could see the opulence, the style, the leeches, the carnage of war, the smoke, the soldiers and their passion, the jungles, the fumes, lazy rivers, and the lovers as they found each other.

“He holds it up close to his rheumy fading, eyes. The letter is addressed to the National War Museum in an elegant, cursive handwriting, in a plain unmarked envelope.”

“He stood, his face like stone, a wall, a cliff, completely still. For a second Chhoto mashi felt the hahakar, the desolate cry of his soul. Then, he looked at her directly, and it was as if she had been stung, slapped, electrocuted, annihilated.”

The part where a young soldier steps on a landmine and is standing still as he does as instructed is gut wrenching. Such poise in the face of death and what sacrifices they all made. I could mention many such instances but it is best if you read the book.

The authors, Sanjay Chopra and Namita Roy Ghose make an excellent partnership for writing. The visual descriptions are so strong and made reading the book a delight as I was transported to those patriotic times. I look forward to reading more books by the authors. I can confidently vouch that a new best seller book has emerged.

Nishonko, Debraj and Aditi are the main protagonists of the story. They are as different as can be from each other but accurately depict the life and times of pre-independent India. The angst, the urgency, the youth stuck between two worlds and that underlying vein of patriotism that binds them.

Aditi is the young – very young girl. Sweet, confident, kind and impish yet wise beyond her years. She took my heart with her quite strength. Debraj is the suave, handsome golden boy born with a silver spoon. He everything money can buy but he follows Nishonko to paths unknown to fill that indescribable yearning. Nishonko has suffered loss yet he is solid, brooding as he inspires and he is the typical TDH – tall, dark and handsome. The author has penned strong, deep characters in the book that makes them come alive within the pages.

Netaji, as the inspiring leader shines across the book, surrounded by many memorable characters. Evil Goopta who turns up when we least expect him and makes his presence felt. Kabootar took my heart with his loyalty while Chhoto Mashi with her concern and love. Debi, the little sister that was the link to it all. Meenakshi, the friend who was so much more. As well as so many others which we lost during the journey.

I recommend this book to all who want a slice of India – young India on the verge of Independence, the journey of self-discovery and how we often let our loved ones and our country down. Not an ending that I loved but then we cannot change history. How at the end of it all we realise that we are humans and that is our failing yet that is our triumph.

You can get your copy by clicking on this book image below.

This content contains Amazon Affiliate Links, which means I receive compensation if you make a purchase using this link.

[bctt tweet=”The angst, the urgency, the youth stuck between two worlds and that underlying vein of patriotism that binds them. #TheWrongTurn” username=”indywrites”]

1944, Kohima — a small, sleepy town in northeast India.Subhash Chandra Bose and his Indian National Army (INA) along with the Japanese, are on the brink of bringing the Empire to its knees and forcing the British out of India. But, inexplicably, the tables turn. The INA’s advance is thwarted and the victory march to Delhi is halted. Seventy years later, the British admit that the Battle of Kohima was the greatest battle they had ever fought. Even more so than the battles of Waterloo and Dunkirk. Was it then that old Indian curse — betrayal? Someone from within Netaji’s own ranks? Were there forces other than the British, waiting in the shadows closer to home, who stood to gain even more from the INA’s defeat? Or was it just love that irrevocably altered the course of India’s destiny? The Wrong Turn: Love and Betrayal in the Time of Netaji, is a sweeping tale of passion set against the freedom struggle. Debraj, the rakish playboy and scion of a distinguished Calcutta family, and Nishonko, the fiery revolutionary sworn to the cause of the INA, must not only fight their common enemy, but also for the love of Aditi, the rebel with the healing touch. A haunting tale of love, friendship and betrayal of an entire nation, The Wrong Turn veers inexorably towards a poignant redemption.

SANJAY CHOPRA is an airline pilot and author of two collections of short stories.  Said and Done and Tailspin stories . He believes that his office forty thousand feet in the sky and his travels provide him with a view that fuels his vivid storytelling that cuts a wide arc through time and space. His stories have won the Invisible Ink, the Millennium writers and Southport awards in the UK and USA. In the words of his readers, ‘He is a storyteller like those of the old days, yet his stories are as modern as tomorrow. He lives in Mumbai with his wife Tisca Chopra, an actress and he is currently working on a film script and a web series.

During a school project on ‘The most memorable day of my life’, NAMITA ROY GHOSE wrote about a Russian girl on the day WW2 ended. She got her first rejection slip from the teacher for making things up. Ever since, Namita has established her storytelling skills through her scriptwriting, screenplays poetry, fiction, legendary advertising campaigns, and as a renowned advertising film director. A Creative Director with HTA, she left after 13 years to start her own film company, White Light, one of India’s top ad film outfits. A social activist, she is the founder of Vanashakti, an NGO that works to protect the environment. Namita has done pro bono work on issues like domestic violence, child welfare, sexual harassment and forest preservation. She is an avid traveller, a photographer, foodie and teacher.